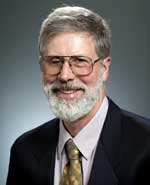 
John Lindl is currently the Chief Scientist for the NIF Programs Directorate at Lawrence Livermore National Laboratory, where he works with the major participants in the NNSA stewardship program to develop a national plan for ignition on NIF.

Lindl received his B.S. in engineering physics from Cornell University in 1968 and his Ph.D. in astrophysics from Princeton University in 1972. Lindl is a Fellow of the American Physical Society and of the American Association for the Advancement of Science. In 1993, he was awarded the Edward Teller Medal and in 1994 he received the E.O. Lawrence Award for work in Inertial Fusion. He is the recipient of the 2000 Fusion Power Associates Leadership Award.

He joined Lawrence Livermore National Laboratory in 1972 as a physicist in A-Divisions X-group, concentrating on fluid instabilities and high gain inertial confinement fusion (ICF) targets. In 1983, Lindl was named X-Division Leader and Associate Program Leader for Theory and Target Design in the ICF Program. In 1990, Lindl was placed in charge of the Nova Laser Program with the goal of developing the physics basis for proceeding with a 1-2 MJ laser designed to demonstrate thermonuclear ignition and propagating burn in the laboratory.

Lindls work in ICF has spanned a wide range of topics including high gain target designs for lasers and particle beams, hydrodynamic instabilities in ICF, implosion symmetry and hohlraum design, high energy electron production and plasma evolution in hohlraums, and the physics of compression and ignition. A book written by Lindl, titled Inertial Confinement Fusion published by Springer-Verlag in 1998, has become a widely used reference for the science of inertial fusion.