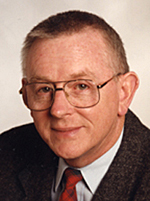 
"For his innovative experimental studies of electron collisions with atoms and molecules which have significantly advanced our understanding of collisional and radiative processes in ionized gases at the microscopic level."


McConkey received his B.S. degree in 1958 and his PhD in 1963) degrees from Queen's University, Belfast. Following a year in Paris, he returned to a faculty position at Queen's. In 1970 he was appointed full professor of physics at the University of Windsor where he later became a university professor. His research interests have covered a wide range of topics, particularly involving the collisions of electrons, ions, photons, atoms, molecules and clusters. He has been a major player in the establishment of our current data bank of absolute electron-impact cross-sections. These have provided vital underpinning to a number of fields and technologies such as atmospheric and planetary physics, astrophysics and both low and high temperature plasma physics. Data from his laboratory on impact excitation, ionization, molecular and cluster dissociation and elastic and inelastic electron scattering are widely regarded as standards in the field.

He has been the recipient of numerous prestigious fellowships and awards which have enabled him to work for extended periods with colleagues at the California Institute of Technology, Jet Propulsion Laboratory, and at the Universities of Manchester. Belfast and Edinburgh. He is a Fellow of the Royal Society of Canada and a Fellow of both the British Institute of Physics and the American Physical Society. He was a Canada Council Killam Fellow from 1986 to 1988. In 1999 he was the recipient of the Gold Medal of the Canadian Association of Physicists for lifetime achievement in Physics.