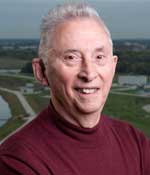 
"For critical and enduring efforts in making the Tevatron Collider the outstanding high energy physics accelerator of the last two decades."


John Peoples was Director of Fermilab from 1989 to 1999, he was appointed Director Emeritus in 1999.  He received a B.S.E.E. from Carnegie Institute of Technology in 1955.  After working at the Martin Aircraft Corporation as an engineer, he entered Columbia University in 1959, where he received a Ph.D. in Physics in 1966. After serving on the faculties of Columbia University and Cornell University he joined Fermilab in 1972.  He collaborated in high energy photoproduction experiments, which observed the J/&#61529; particle, providing evidence that it was a hadron.  He was appointed project manager of Tevatron I in 1981 and led the construction and commissioning of the Antiproton Source.  Tevatron I completed the transformation of the Tevatron from a fixed target accelerator to a proton-antiproton collider.

Under his leadership, the Tevatron luminosity increased by a factor of 20 between 1990 and 1994, making it possible for CDF and D0 to discover the top quark. Under his leadership the Main Injector Project was proposed in 1990 and completed in 1999. The Main Injector together with the luminosity improvements initiated during his tenure and completed by his successors increased the collider luminosity by another factor of 20, further extending its potential for discovery.