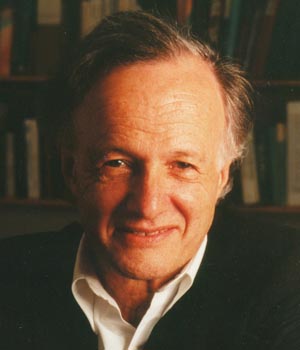 
"For seven decades of tireless activism for a nuclear-weapons-free world, for upholding human rights and freedom of speech globally, for public education on the essential role of science in society, and for a visionary approach to bringing about a hopeful, peaceful future."


The Honourable John Charles Polanyi, P.C., C.C., F.R.S., F.R.S.C. John Polanyi, educated at Manchester University, England, was a postdoctoral fellow at Princeton University, U.S.A. and the National Research Council, Canada. Since July 2021 he has held the title Emeritus University Professor at the University of Toronto where he is actively publishing scientific papers and commentaries on public affairs. His research is on the molecular motions in chemical reactions in gases and at surfaces. He is a Fellow of the Royal Societies of Canada (F.R.S.C.), of London (F.R.S.), and of Edinburgh (F.R.S.E.), also of the American Academy of Arts and Sciences, the U.S. National Academy of Sciences, the Pontifical Academy of Rome and the Russian Academy of Sciences. He is a member of the Queen's Privy Council for Canada (P.C.), and a Companion of the Order of Canada (C.C.). His awards include the 1986 Nobel Prize in Chemistry, the Royal Medal of the Royal Society of London, and over thirty honorary degrees from six countries. He has served on the Prime Minister of Canada's Advisory Board on Science and Technology, the Premier's Council of Ontario, as Foreign Honorary Advisor to the Institute for Molecular Sciences, Japan, and as Honorary Advisor to the Max Planck Institute for Quantum Optics, Germany. He was a founding member of the Committee on Scholarly Freedom of the Royal Society, and President of a further international human rights organization, the Canadian Committee for Scientists and Scholars. Additionally he was the founding Chairman of the Canadian Pugwash Group (1960-1980) being active for 40 years in International Pugwash. He has written extensively on science policy, the control of armaments, and peacekeeping. He is co-editor of a book, 'The Dangers of Nuclear War', and was a participant in the recent 'Canada 21' study of a 21st century defence posture for Canada. He was co-chair (with Sir Brian Urquhart) of the Department of Foreign Affairs International Consultative Committee on a Rapid Response Capability for the United Nations. URL: www.utoronto.ca/jpolanyi/