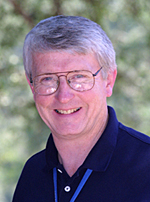 
"For technical leadership and direct contributions to the development of high luminosity B-factories at KEK and SLAC. These machines have set new world records for luminosities in colliding-beam storage rings."


Seeman attended Iowa State University, where he received his B.A. in physics (1973). He received a Ph.D. in physics at Cornell University, Ithaca, N.Y. (1979) designing and building the injection system for the CESR e+e- Collider. He served as a Research Associate in accelerator physics at Cornell from 1979 to 1982 investigating the beam-beam interaction, higher luminosity interaction regions, and storage ring vacuum systems at CESR. Joining the staff of the Stanford Linear Accelerator Center (1982), he was the Linac System Manager during the construction of the SLAC Linear Collider (SLC) and subsequent operation. He led the effort to minimize the beam emittances in the SLC accelerator.