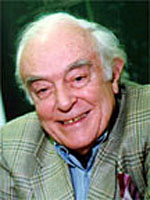 
"For his leading role in educating scientists, members of Congress and the public on the importance of civilian control of nuclear policy and his critical efforts in the planning and execution of the International Geophysical Year, which established in 1957, a successful model for today's global scale scientific endeavors."

Dr. Simpson's current research includes experiments on the Ulysses Spacecraft to measure the isotopic and elemental composition of the galactic cosmic radiation in order to determine their nucleosynthetic origins and their lifetime in galactic magnetic fields. Following his discovery with P. Meyer and E.N. Parker in 1956 of heliospheric magnetic fields enclosing the solar system, he investigated charged particle acceleration by shocks and particle propagation modes from the galaxy and Sun. The heliosphere became his astro-particle "laboratory". Particle acceleration in the magnetospheres of planets were investigated with the first space probes to Mercury, Mars, Jupiter and Saturn.

Dr. Simpson's personal concern for the use of nuclear weapons began in 1944 and led to the organization and Chairmanship of the Atomic Scientists of Chicago in 1945. He is a co-founder of the Bulletin of the Atomic Scientists (1945), and is currently, President of the Board of Sponsors of the Bulletin. Dr. Simpson, who is a member of the National Academy of Sciences, has been honored by receiving the NASA Medal for Scientific Achievement (1974), the COSPAR Award of United Nations for Scientific Research in Space (1990), the Bruno Rossi Prize of the American Astronomical Society (1991), and the Arctowski Medal from the National Academy of Sciences (1993).