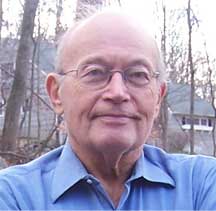 
"For predicting spin-transfer torque and opening the field of current-induced control over magnetic nanostructures."


John Slonczewski received the Physics BS at Worcester Polytechnic Institute in 1950 and the Physics PhD at Rutgers University in 1955. He pursued solid-state theory as Research Staff Member in IBM from 1955 until retiring in 2002. He was located at Yorktown Heights, NY USA, except for sabbaticals in 1965-6, 1970-1, and 1987 at Rueschlikon, Switzerland.
His research in solids included fundamental theories of graphite bands, dynamic Jahn-Teller effect, and structural phase transitions. But he mostly concentrated on magnetism, including magnetic anisotropy, dynamics of bubble domains, magnetoresistance and spin-transfer torque between magnetic films separated by tunnel barriers or metallic spacers, dynamics of magnetic vortices, and exchange interactions between films. Some of this work contributes critically to magnetic-memory initiatives.  At times, he managed groups of general theorists and magnetism experimentalists. His personal research today involves thermallly-driven spin transfer.
Dr. Slonczewski is Fellow of the American Physical Society and Life Member of the Institute of Electrical and Electronic Engineers. His awards include an IBM Outstanding Achievement Award, the 2006 IUPAP Award and Neel Medal in Magnetism, and the 2012 IEEE Magnetics Society Achievement Award.