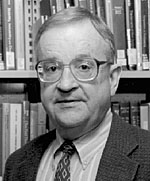 
"For his preeminent theoretical guidance and inspirational leadership in exploiting electromagnetic and weak probes of the nucleus and for his fundamental contributions to the understanding of the nucleus as a relativistic quantum many-body system."


John Dirk Walecka was born in Milwaukee, WI in 1932. He received his BA degree from Harvard in 1958 and his Ph.D. degree under V. Weisskopf from M.I.T. in 1958. He spent two years at CERN and Stanford on an NSF Postdoctoral Fellowship, and in 1960, joined the Stanford Physics Faculty , turning emeritus in 1987.

In 1986, Walecka became Scientific Director of CEBAF and served in that capacity until 1992 when he became Governor's Distinguished CEBAF Professor of Physics at the College of William & Mary and Senior Fellow at CEBAF. A Fellow of the American Physical Society since 1971, he is currently Chair of the Division of Nuclear Physics, and of the Physics Department at William & Mary. In 1970 Walecka received the Gores Award for Excellence in Teaching from Stanford and in 1991 was the Distinguished Schiff Lecturer there. He has over 130 scientific publications including 6 books, the latest of which, "Theoretical Nuclear and Subnuclear Physics" (1995), is intended to provide graduate students with a basic level of understanding of modern nuclear physics so that they in turn can explore the scientific frontiers.