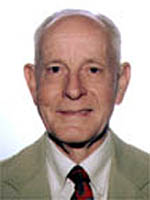 
"For his important contributions to the quantitative understanding and development of gas discharge light sources and for his leadership at the interface between the basic science and the industrial applications of plasmas."


Dr. John F. Waymouth received a Ph.D. degree in Physics from MIT in 1950, and immediately joined the Lighting Division Laboratories of Sylvania Electric Products, Inc. He remained in this organization for the balance of his working career, although it experienced numerous changes of corporate identity. It is most recently the research laboratories of the Osram-Sylvania Lighting Corporation. His early career was spent as an individual investigator studying the physics and chemistry of electric discharge lamps. In the course of this work, he developed (in collaboration with Prof. Francis Bitter of MIT) one of the first complete models of the rare-gas/mercury discharge used in fluorescent lamps. He made significant contributions to theory and technique of Langmuir Probe measurements of plasma parameters, and to developing an understanding of cathode behavior in discharge lamps. He also made major contributions to the development of metal halide arc lamps, and holds many important patents on these devices. In 1969 he was promoted to be Director of R&D for the Lighting Group, a position he held until his retirement from GTE in 1988.

He is presently active as a consultant in the area of discharge lamps. He is the author of 29 refereed articles, 8 review articles, and one book, Electric Discharge Lamps . He holds 57 issued US patents. He is the recipient of the Elenbaas Prize in 1973 for outstanding contributions to the furtherance of knowledge in the area of light sources. He was awarded the IES Medal of the Illuminating Engineering Society of North America in 1991.