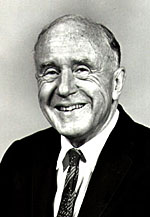 
John Archibald Wheeler received his Ph.D. in theoretical physics from Johns Hopkins University in 1933. Following postdoctoral years with Gregory Breit in New York and Niels Bohr in Copenhagen, he joined the faculty of the University of North Carolina. In 1938 he moved to Princeton University, where he remained until 1976. He then spent a decade at the University of Texas at Austin. His early contributions include the S matrix, the theory of nuclear rotation (with Edward Teller), the theory of nuclear fission (with Niels Bohr), action-at-a-distance electrodynamics (with Richard Feynman), positrons as backward-in-time electrons, the universal Fermi interaction (with Jayme Tiomno), muonic atoms, and the collective model of the nucleus. Beginning in 1952, he became immersed in gravitation physics, "inventing" the geon and quantum foam, and later coining the terms Planck scale and black hole. With students and colleagues, he explored the consequences of general relativity, delineating many properties of black holes and gravitational radiation. With Charles Misner and Kip Thorne, he co-authored the landmark monograph Gravitation. His work in quantum theory includes proposing a delayed-choice experiment, subsequently executed. In the 1940s Wheeler contributed to the Manhattan Project, and in the 1950s to the development of thermonuclear weapons. His many honors include Israel's Wolf Prize, America's Enrico Fermi Award, and Italy's Matteucci Medal. His memberships include the National Academy of Sciences and the American Philosophical Society. He served as APS President in 1966.