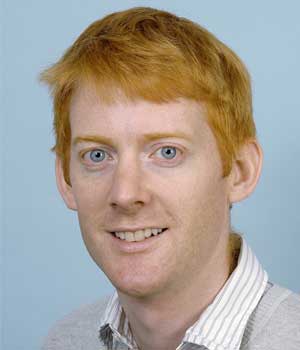 
"For the development and demonstration of trapped-ion quantum computing protocols, including Bell state stabilization by feedback control in mixed-ion chains, and the encoding of logical quantum states in the ion motion."


Jonathan Home received an M.Phys. degree from the University of Oxford in 2002, where he stayed to perform a D.Phil. in trapped-ion quantum computing under the supervision of Prof. Andrew Steane. Following graduation in 2006, Jonathan moved to NIST Boulder with the support of a Lindemann Fellowship, working in the ion storage group led by David Wineland. There, he performed a series of experiments with mixed-species ion chains, including the first demonstration of entangled mechanical oscillators and a complete toolbox for scalable trapped-ion quantum computing. In 2010 Jonathan established a new research group at ETH Zürich, obtaining tenure in 2017. His group has pioneered methods for producing and diagnosing harmonic oscillator states, creating some of the largest examples of squeezed and Schrodinger’s cat states, while also implementing novel control techniques for quantum computing. For his work in trapped-ion physics, Jonathan was awarded the 2013 Erlangen Graduate School in Advanced Optical Technologies Young Researcher Award, the 2016 ETH Zurich Latsis prize and a 2015 TED Fellowship. In 2016 he was recognized as an Outstanding Referee of the American Physical Society.