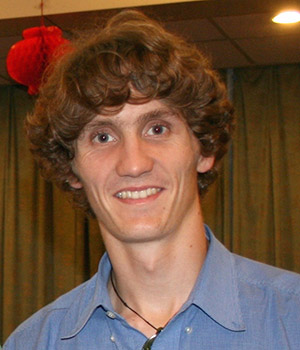 
"For fundamental contributions to dynamo theory, particularly the analytical and computational elucidation of the magnetic shear current effect."


Jonathan Squire received a B.Sc. in physics from the University of Otago in New Zealand in 2009. During this time, he carried out various research projects into cold atoms and atom optics. In 2010, Jonathan attended graduate school at the Princeton Plasma Physics Laboratory on a Fulbright science and technology fellowship, working with several groups on both experimental and theoretical plasma physics projects before joining Amitava Bhattacharjee’s group in 2013. Jonathan’s dissertation research centered on turbulent plasmas in astrophysics, focusing on the magnetorotational instability and the behavior of dynamos in the presence of strong shear flows. Jonathan is now a Sherman Fairchild postdoctoral fellow in the theoretical astrophysics group at Caltech. His recent interests span a variety of topics relevant to plasmas in different space and astrophysical regimes, including the dynamics of weakly collisional high-beta plasmas, accretion disks, turbulence in the interstellar medium, and the behavior of solid particles entrained in fluids and plasmas.