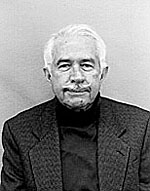 
"For his contributions to the theory of quantum methods, including the application of time dependent calculations to the understanding of complex collisional processes; and for providing an effective role model for all students, demonstrating that balancing service, profession, and family need not compromise excellence."


Dr. Garcia received his B.S. degree in physics from New Mexico State University in 1957 and his Ph.D. in 1966 from the University of Wisconsin (Madison). He has worked on a variety of areas of Atomic Physics, including time-dependent Hartfree-Frock theory for ion-atom, ion-surface interactions, and binary encounter approximations.

Dr. Garcia is a fellow of the APS. He has been a Fulbright Scholar, a NORDITA Fellow, and a recipient of the Air Force Commendation Medal. He has served as President of the National Physical Sciences Consortium, Chared the ETS Graduate Record Exam Committee in Physics, served on the APS Panel on Public Affairs and on the Committee on International Scientific Affairs, among other APS committees. He serves on the Executive Board of the Fourcorners Section of the APS and is on the Executive Committee of the Forum on Physics and Society.