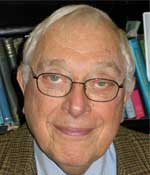 
Joseph L. Birman, Distinguished Professor of Physics at CCNY and CUNY, graduated from the Bronx High School of Science (1943), received the B.S. from CCNY (1947) the Ph.D. from Columbia University (1952) and a Docteur es Sciences, h.c from Universite de Rennes (1974). He was Professor of Physics at NYU (1962 74), and Senior Scientist at GTE Research Labs (1952 62). His research is in theoretical physics especially symmetry related aspects of phase transitions and response functions, mechanisms of optical properties and cooperative and competitive many particle effects. He is known for work on resonant light scattering, mechanisms of light emission, and dynamical symmetry (Lie Algebra) collective effects in condensed matter systems. He has mentored about 35 Ph.D. students and 40 post doctoral researchers. He supports repressed scientists around the world, for example in former USSR, Cuba, Peoples Republic of China, Cuba, Iran. This was done by personal intervention with authorities, as well as by being a member or chair of:  The APS Committee on International Freedom of Scientists (CIFS),APS Forum on International Physics (FIP),Committee of Concerned Scientists(CCS),Human Rights Committee of the N Y Academy of Sciences, Human Rights in China (HRIC), and the AAAS Committee on Professional Responsibility. In 2003 the NYAS awarded him the Heinz Pagels Award for support of Human Rights of Scientists. His work toward international cooperation includes co organizing three US USSR BiNational Symposia on Light Scattering in Solids (Moscow, New York and Leningrad). He also negotiated and signed for the APS a Memorandum of Understanding with the Chinese (PRC) Academy of Sciences, and Ministry of Education creating a US PRC Cooperative Program in AMO and Condensed Matter Physics. That program, which he directed for the first 3 years, ultimately brought 60 senior Chinese physicists to major US laboratories for 2 year visits to do cutting edge research.