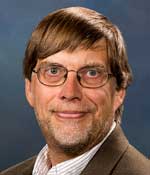 
Joseph Carlson, Ph.D., works on quantum few- and many-body theory in nuclear physics and related areas including neutrinos, cold-atom physics, and dense matter. He is presently group leader of the Nuclear, Particle, Astrophysics and Cosmology Group in the Theoretical Division of Los Alamos National Laboratory (LANL) in New Mexico. Dr. Carlson received his B.S. in physics from the Georgia Institute of Technology (Atlanta) in 1977 and his Ph.D. from the University of Illinois at Urbana-Champaign in 1983. He worked at the Courant Institute at New York University before moving to LANL as an Oppenheimer Fellow. Dr. Carlson received the LANL Fellows prize for research in 2001. He is a fellow of LANL and the American Physical Society. His current research interests include computational nuclear many-body theory, studies of dense matter and neutron stars, cold-atom physics, and neutrinos in accelerator experiments and astrophysical environments.