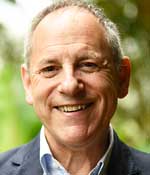 
"For outstanding leadership of the International Year of Light (2015) and for optical science and engineering outreach on a global scale."


Joseph J. Niemela, Ph.D., has been at the Abdus Salam International Centre for Theoretical Physics (ICTP) in Trieste, Italy, since 2003, most recently as a senior research scientist heading both the Applied Physics Section, and the Office of External Activities, in addition to conducting research in fluid turbulence. Dr. Niemela was the coordinator of the Global Secretariat of the International Year of Light and Light-based Technologies 2015, is an elected vice president of the International Commission for Optics, and is co-director of UNESCO’s Active Learning in Optics and Photonics program. Dr. Niemela is a member of the Scientific Council of Centro Fermi in Rome, and a member of several professional societies, including the American Physical Society, Society of Photo-Optical Instrumentation Engineers (SPIE), the Optical Society, and Sigma Xi. He was a recipient of the SPIE Educator of the Year Award in 2011, the Italian Physical Society’s Galileo Galilei Silver Medal in 2015, and is a Fellow of the American Physical Society. Dr. Niemela graduated with honors when he received his B.S. in physics from the University of Oregon (Eugene) in 1982. He completed his Ph.D. in physics in the area of low temperature physics in 1987, also at the University of Oregon (Eugene), under the supervision of the late Russell J. Donnelly. Dr. Niemela’s postdoctoral work was supported by an IBM Fellowship at the University of California, Santa Barbara with Guenter Ahlers, Ph.D.