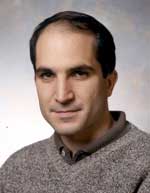 
"For profound developments in Mathematical Physics that have illuminated interconnections and launched major research areas in Quantum Field Theory, String Theory, and Gravity."


Born in Argentina, got my "Licenciatura" in 1991 from "Instituto Balseiro, Universidad de Cuyo, Argentina".

Ph.D. 1996 from Princeton University.
I was a postoc at Rutgers University 96-97
Professor at Harvard 97-01
Professor at Institute for Advanced Study 01-present

I have been working on the relationship between quantum field theories and gravity. Exploring the connection between strings and large gauge theories with a large number of colors. One interesting application is to the physics of black holes.