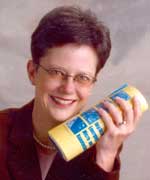 
"For her leadership and pioneering research in materials physics for industrial and national security applications."


Julia M. Phillips is Director of the Physical, Chemical, and Nano Sciences Center at Sandia National Laboratories (since 2001). She concurrently served as the Director of the Center for Integrated Nanotechnologies (CINT) during 2005-2007. She came to Sandia in 1995 after 14 years at AT&T Bell Laboratories. She has a Ph.D. in applied physics from Yale University and a B.S. in physics from the College of William and Mary. Her research has been in the areas of epitaxial metallic and insulating films on semiconductors, high temperature superconducting, ferroelectric, and magnetic oxide thin films, and novel transparent conducing materials. Phillips is chair of the APS Division of Condensed Matter Physics and a past president of the Materials Research Society. She a member of the National Academy of Engineering and the American Academy of Arts and Sciences, and is a Fellow of the American Physical Society and the American Association for the Advancement of Science. She has served on the editorial boards of Applied Physics Letters, Journal of Applied Physics, Applied Physics Reviews, and Journal of Materials Research and has published over 100 papers. She also holds five patents.