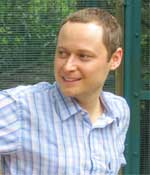 
"The Impact of Defects on Computer Technology: From CMOS to Quantum Computers."

At UC Santa Barbara, he pursued a PhD in Physics. He studied defects in semiconductors with his advisor Chris G. Van de Walle, and examined the impact of atomic scale defects on modern computer technology, with specific focus on nonclassical CMOS devices and quantum computers. Justin explored novel channel materials and dielectrics for CMOS devices, and characterized sources of fixed charge and electrical traps in these materials. In addition, he also developed passivation schemes for these defect traps. In regards to quantum computing, Justin has studied the implementation of semiconductor defects as qubits. Specifically, he helped create a framework characterizing and designing novel defects to be used as qubits. For this work, Justin was awarded the International Union of Pure and Applied Physics Young Author Best Paper Award. After completing his PhD, Justin joined Intel Corporation, where he continues to work in computational materials science.