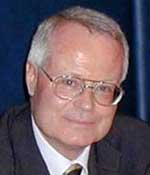 
"For his ground breaking and visionary work towards developing a cohesive picture of the r-process by employing novel experimental techniques to study the decay of nuclei far from stability, working with observations of astronomers, models of astrophysicists and nuclear theorists, and the geochemical analyses of meteorites."


Karl-Ludwig Kratz studied chemistry at the Johannes-Gutenberg University of Mainz. For his graduate studies (diploma in 1966; Ph.D. in 1972 with "summa cum laude") he turned to the field of nuclear chemistry at the institute of Fritz Strassmann with its TRIGA reactor under the supervision of Günter Herrmann. The subject of his thesis work was the measurement of ß-delayed neutron properties of short-lived fission products obtained via ultra-fast chemical separations. Later, as postdoc and professor in Mainz (Habilitation in 1979; full professor in 1980), his interests evolved in time from experiments at the ILL high-flux reactor in Grenoble (with B. Pfeiffer and M. Wiescher) and various international accelerator facilities (e.g. CERN/ISOLDE, GANIL, MSU/NSCL) on isotopes relevant for the astrophysical r-process to include nuclear-structure theory (with P. Möller), explosive nucleosynthesis modeling (with F.-K. Thielemann), astronomy (with J.J. Cowan, C. Sneden and L.I Mashonkina) and geo- & cosmochemistry (with G. Lugmair and U. Ott).

Karl-Ludwig Kratz is Adjunct Professor at the University of Notre Dame, and a member of the Deutsche Physikalische Gesellschaft and Astronomische Gesellschaft. In 1999 he received the Nuclear Chemistry Award (now Glenn T. Seaborg Award) of the Americal Chemical Society and in 2004 the GENCO Award of the GSI. In 2006 the United Star Foundation Ltd. honored him by denoting the metal-poor halo star BD+17°3248 as "Karl-Ludwig Kratz Stern".