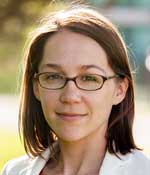 
"For the elucidation of quantum frustrated magnetism and its expression in the ground state selection of pyrochlore magnets."


Kate A. Ross, Ph.D., graduated from the University of Waterloo (Ottawa, Ont.) in 2007 with a B.Sc. in physics. As part of her undergraduate research, she worked on frustrated pyrochlore magnets in an ultra-low temperature laboratory. She then continued to study pyrochlore lattice materials using inelastic neutron scattering while earning her Ph.D. from McMaster University (Hamilton, Ont.), which she completed in 2012 and for which she was awarded the Neutron Scattering Society of America Prize for Outstanding Student Research in 2014. She held a postdoctoral appointment at Johns Hopkins University (Baltimore, Md.) and the National Institute for Standards and Technology Center for Neutron Research in Gaithersburg, Maryland, where she sharpened her expertise in neutron scattering. Dr. Ross then moved to Colorado State University (Ft. Collins) as a Natural Sciences and Engineering Research Council of Canada postdoctoral fellow, during which time she expanded her range of solid state synthesis techniques and was awarded the Alice Wilson Prize by the Royal Society of Canada. In 2015, Dr. Ross took up her current position as an assistant professor in physics at CSU. She was recently awarded a two year term as a Canadian Institute for Advanced Research Azrieli Global Scholar in the Quantum Materials Program. Dr. Ross’s research group is developing new materials to study quantum magnetic phases requiring strong spin-orbit coupling. The group uses various types of crystal growth techniques of complex oxide materials and then studies their often-unconventional behavior using thermodynamic probes and inelastic neutron scattering.