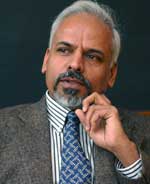 
"For his commitment to mentoring students and junior colleagues and his significant contributions to fostering international collaborations and promoting the advancement and education of early career scientists from the developing world."


Katepalli R. Sreenivasan joined Yale University in 1979 on its teaching faculty, following his education and post-doctoral work in India, Australia and the Johns Hopkins University. In 2002, he moved to the University of Maryland as the Director of the Institute of Physical Science and Technology. A year and a half later, he took up his current position as the Director of the International Centre for Theoretical Physics in Trieste, Italy, where he also holds the Abdus Salam Research Professorship.

His research interests are primarily in fluid dynamics, but they have also touched on a few other areas of physics.