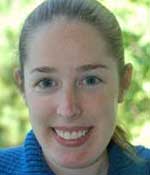 
"The First Determination of the Proton’s Weak Charge Through Parity-Violating Asymmetry Measurements in Elastic e + p and e + Al Scattering."


Katherine Myers received her B.S. in Physics from Lebanon Valley College in 2005. She attended graduate school at George Washington University, where she became involved in the Qweak experiment at the Thomas Jefferson National Accelerator Facility, which aimed to make a precise measurement of the proton's weak charge using parity-violating electron scattering and test the predictions of the Standard Model. Under the guidance of Allena Opper (GWU) and David Mack (TJNAF) she received a Ph.D. in 2012 for her analysis of the first Qweak data. Katherine is currently a postdoctoral associate at Rutgers, The State University of New Jersey. With Ron Gilman she is working on a new experiment that will make a precise simultaneous measurement of muon-proton and electron-proton scattering to provide new information in hopes of solving the "proton-radius puzzle." The experiment is expected to run in 2016-2017 at the Paul Scherrer Institute in Switzerland.