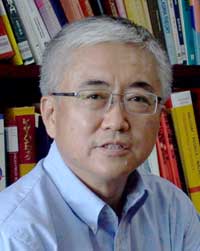 
Kazuo A. Tanaka finished his PhD at the Laboratory for Laser Energetics, University of Rochester in 1982 after graduating Osaka University in Japan. He stayed as a Post Doc. and scientist at the University of Rochester for three years and then he became an assistant professor and has been a professor since 2001 at Osaka University. His major interests are on fast ignition, laser plasma interactions, equation of state of matters. He has been a leader in many these experiments. He published more than 150 scientific papers. He reported the first deuterium fuel implosion using foam spherical shells and fast ignition integral experiments as invited talks at the APS. He is an APS fellow and board members of Japanese Society of Plasma Science and Nuclear Fusion Research (JSPF), Journal of Plasma Physics and Fusion Research in Europe and several international conferences. He is a chief editor of the Journal of JSPF. He received the Minister of Education and Culture award (Japan) in 2005 for the achievement of fast ignition research. He is a member of APS, JSPF, and JPS (Japanese Society of Physics).