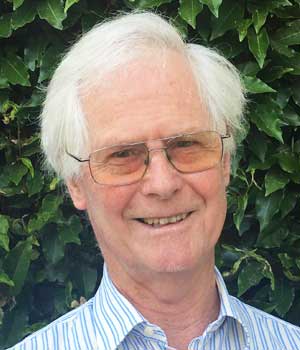 
Dr. Keith Moffatt graduated with an M.Sc. from Edinburgh University, UK in 1957, and a Ph.D. from Cambridge University in 1962. In collaboration with Emmanuel Dormy, Dr. Moffatt is currently completing a book, “Self-Exciting Fluid Dynamos”, to be published in 2019.  He is engaged in research on the Navier-Stokes finite-time singularity problem, and has continuing interest in astrophysical and geophysical magnetohydrodynamics, topological fluid dynamics, soap film dynamics and, most recently, robot dynamics. He is a fellow of the Royal Society and a Foreign Associate of the U.S. National Academy of Sciences, as well as being a fellow of the Royal Society of Edinburgh, an elected member of Academia Europæa, and a Foreign Member of the Académie des Sciences, Paris, the Accademia Nazionale dei Lincei, Rome, and the  Royal Netherlands Academy of Arts and Sciences. He holds honorary doctorates from the universities of Edinburgh, Glasgow, and Eindhoven, the State University of New York at Utica, and the Institut National Polytechnique de Grenoble, France. He received Cambridge University’s 1960 Smith's Prize, the 2001 Panetti-Ferrari International Prize and Gold Medal, the 2003 Euromech Prize in Fluid Mechanics, the 2005 Senior Whitehead Prize of the London Mathematical Society, the 2005 Royal Society Hughes Medal, and the 2009 David Crighton Medal (Institute of Mathematics and its Applications, and the London Mathematical Society).