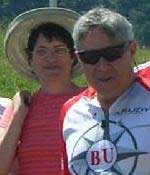 
Kenneth Lane received his B.S. in Physics in 1964 and M.S. in Physics in 1965 from Georgia Institute of Technology, and his Ph.D. in 1970 from Johns Hopkins University. Since 1988 Lane has been a Professor in the Physics Department at Boston University. He is a Fellow of the American Physical Society and was a Frontier Fellow at Fermilab in 2001-2.

Lane's research is in theoretical high-energy physics. At Berkeley, he employed the modern renormalization group to characterize dynamical chiral symmetry breaking in quantum chromodynamics. At Cornell, with E. Eichten and other collaborators, he developed the "Cornell potential model" of charmonium, which successfully predicted the spectrum and decays of bound AA states. At Harvard, he and Eichten invented the flavor symmetry breaking mechanism of dynamical electroweak symmetry breaking called "extended technicolor".

In 1983-84, with E. Eichten, I. Hinchliffe and C. Quigg, Lane wrote Supercollider physics. This paper explored the reach of high-energy hadron colliders for the physics of the Standard Model and for potential new physics associated with the electroweak breaking scale of 1 TeV. These studies were instrumental in selecting the principal parameters of the Superconducting Super Collider: pp beams colliding with s H 40 TeV and annual luminosity H 10 fb-1. Lane is active in guiding experimental searches for technicolor at Fermilab's Tevatron and CERN's Large Hadron Collider.
Selection Committee: