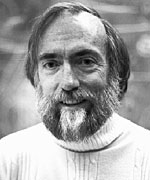 
"For contributing significantly to the theoretical understanding of such topics as black holes, gravitational radiation and quantum nondemolition measurements; for advocating tirelessly the development of gravitational radiation detectors; and for conveying lucidly the excitement of these topics to professional and lay audiences alike"

Thorne's research has focused on gravitation physics and astrophysics, with emphasis on black holes and gravitational waves. He has mentored many of the leading theorists who now work on observational, experimental, or astrophysical facets of general relativity. He was co-founder of the LIGO Project (the Laser Interferometer Gravitational Wave Observatory), and he and his research group are now working on theoretical aspects of LIGO.