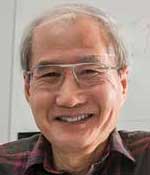 
"For his pioneering theoretical work in synchrotron radiation and free electron lasers that laid the foundation for both third and fourth generation x-ray sources."


Kwang-Je Kim obtained B.S. in Physics from Seoul National University, South Korea, in 1966 and Ph.D. in Physics from University of Maryland in 1970. He started his career as a theorist in elementary particle physics, working at the SLAC, Max-Planck Institute for Physics and Astrophysics in Munich, and Mainz University. He switched to accelerator physics when he joined Lawrence Berkeley Laboratory in 1978. Since 1998 he is at Argonne National Laboratory in 1998, where he is currently an Argonne Distinguished Fellow. He is also Professor (part time) of Physics at the University of Chicago.

He made pioneering theoretical contributions to the understanding of photocathode electron guns, synchrotron radiation, and free electron lasers that laid the foundation of both the third and the fourth generation x-ray facilities. Recently, he has revived the idea of an x-ray free electron laser in oscillator configuration employing Bragg crystals as x-ray cavity mirrors, showing that it could be a source of fully coherent x-ray pulses with extremely high spectral purity.

He has been active in teaching and mentoring scientists. He was elected as a Fellow of APS in 1995, received International Free-Electron Laser Prize in 1997, and USPAS Prize for Achievement in Accelerator Physics and Technology in 2013.