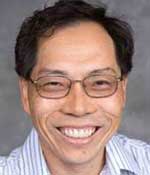 
"For advancing the chemistry and physics of metal clusters using photoelectron spectroscopy, and for innovative development of cluster sources and photoelectron techniques."

Wang is a fellow of the American Physical Society, the American Association for the Advancement of Science, the John Simon Guggenheim Foundation, and the Alfred P. Sloan Foundation. He has received the Humboldt Research Award and the 2014 Earle K. Plyler Prize for Molecular Spectroscopy & Dynamics.