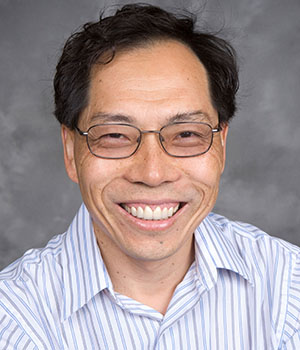 
"For pioneering work in characterizing solution species in the gas phase using high-resolution photoelectron imaging of cryogenically-cooled anions, and outstanding contributions in the investigation of size-selected boron clusters."


Lai-Sheng Wang received his BSc degree from Wuhan University in 1982 and earned his PhD from the University of California at Berkeley in 1990 under Y. T. Lee and D. A. Shirley. He conducted postdoctoral work at Rice University with R. E. Smalley. He is best known for his photoelectron spectroscopy (PES) studies of size-selected nanoclusters and solution-phase negative ions. His lab discovered the smallest golden pyramid and the gold cage. Research on boron clusters by his lab and collaborators paved the way for borophenes and led to the discovery of all-boron fullerenes and the first boron-metal quadruple bond. He is also known for his pioneering work by introducing electrospray to spectroscopy to investigate multiply-charged anions and for his development of the cryogenic Paul trap to create cold ions from electrospray for spectroscopic studies. His lab has discovered dipole- and quadrupole-bound excited states in many anions and used these exotic excited states to conduct resonant PES. He is a fellow of the American Association for the Advancement of Science and the American Physical Society (APS). He is the recipient of the Alfred P. Sloan Research Fellowship, the John Simon Guggenheim Memorial Fellowship, the Humboldt Research Award from the Alexander von Humboldt Foundation, the Earle K. Plyler Prize for Molecular Spectroscopy & Dynamics from APS, the E. Bright Wilson Award in Spectroscopy from ACS, and the Distinguished Research Achievement Award from Brown University.