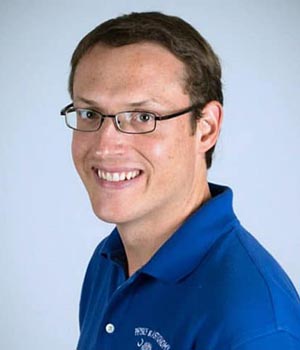 
"For developing an active, inclusive, and supportive community of physics educators dedicated to integrating computation into their instruction; creating, reviewing, and disseminating instructional materials; and generating knowledge of computation in physics curricula and of effective practices."


Larry Engelhardt is a Professor at Physics at Francis Marion University (FMU), and received FMU’s Distinguished Professor award in 2020. He arrived at FMU in 2006, and in that time he has attended — and brought groups of undergraduate students to — his regional APS meeting almost every year. He is also very active in the American Association of Physics Teachers (AAPT), having served as President of his regional AAPT section, and received the 2019 Homer L. Dodge Citation for Distinguished Service to the AAPT. He is also one of the leaders of PICUP (the Partnership for Integration of Computation into Undergraduate Physics, www.compadre.org/PICUP) and has been one of the PIs for a grant from NSF’s IUSE program (Improving Undergraduate STEM Education) to support the work of PICUP. Before arriving at FMU, Engelhardt received his Bachelor's degree in Physics from Gustavus Adolphus College, and PhD in Condensed Matter Physics from Iowa State University, with his dissertation titled “Quantum Monte Carlo calculations applied to magnetic molecules”. He has continued this research with undergraduate students at FMU, and received FMU’s Award for Excellence in Research and Scholarship in 2014. He is also interested in computational physics more generally, having published several articles in both the American Journal of Physics and The Physics Teacher.