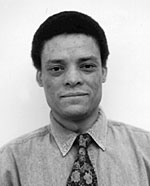 
"For his contributions to elementary particle physics and to education, including the first full reconstruction of a B meson at a hadron collider and development of sophisticated software for the SLAC BaBar experiment, and his development of creative and effective educational programs for under-prepared university students and science outreach programs for Philadelphia schools."

Dr. Gladney's research centers on the elucidation of symmetries among the fundamental particles. While at the University of Pennsylvania, he has focused on determining properties of hadrons containing a bottom quark. The end of this research will be conducted at the Stanford Linear Accelerator Center's PEP-II storage ring with a thorough study of the bottom quark and the implications of its CP-asymmetric decays in shedding light on the origin of the universe.