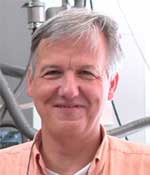 
"For the theoretical prediction and experimental observation of the quantum spin Hall effect, opening the field of topological insulators."


Laurens Molenkamp received undergraduate (1980) and graduate (1985) degrees in Physical Chemistry from the University of Groningen, the Netherlands, specializing in coherent optical spectroscopy. After completing his PhD, he joined Philips Research Laboratories in Eindhoven, the Netherlands, where he soon became involved in quantum transport studies in semiconductor-based nanostructures. This remained his field of interest when he moved back into academia, first joining the RWTH in Aachen, Germany, as an associate professor (1994), and subsequently (1999) the University of Würzburg, where he holds the Chair of Experimental Physics 3 and leads the II-VI MBE unit. His research currently revolves around quantum transport and semiconductor spintronics, combining nanolithography and low temperature transport experiments with the specialized semiconductor epitaxy available at Würzburg. Laurens Molenkamp is a Fellow of the Institute of Physics and the American Physical Society and the recipient of an ERC Advanced Grant. In 2010, he was a co-recipient of the Europhysics prize, awarded by the Condensed Matter Division of the European Physical Society.