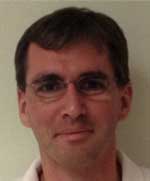 
Dr. Laurent Divol received his engineering B. A. from Ecole Polytechnique (France) in 1994, masters in Oceanography (ENSTA, France) and Theoretical Physics ( Ecole Normale Supérieure, Paris, France) in 1996 and his Ph.D. in theoretical physics with highest honors from Ecole Polytechnique in 1999 for his theoretical work on the effect of laser beam smoothing techniques on stimulated backscattering. He worked from 1996 to 2001 at the Commissariat à l’Energie Atomique (CEA-DAM, Bruyères-le-Châtel, France) as an engineer for the Laser MegaJoule project, France’s approach to indirect drive inertial confinement fusion (ICF). He joined Lawrence Livermore National Laboratory (LLNL) in 2001, where he spent a decade developing a quantitative understanding of laser plasma interaction (LPI) under ICF relevant conditions by combining detailed experimental measurements (mostly at the Laboratory for Laser Energetics, U. Rochester and at the Jupiter Laser facility at LLNL) with state of the art numerical simulations and analytical theory. He was a recipient of the LLNL Science & Technology award in 2005 for his role in the first LPI experiments on the National Ignition Facility. Recently, he has been working for the National Ignition Campaign and has developed an interest in collisional Particle-In-Cell simulations of plasmas, from astrophysics to very high intensity lasers. He is a member of the American Physical Society.