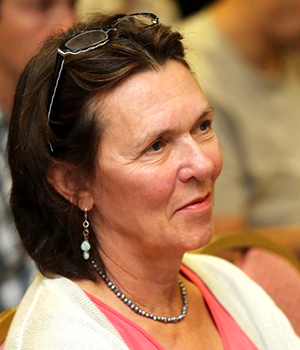 
"for the development and application of methods to accurately compute rate coefficients and charged particle transport coefficients, and their application to predictive modeling of low-temperature plasmas."


Leanne Pitchford received a B.S. in physics and mathematics from East Texas State University in 1970 and a Ph.D. in atomic physics from University of Texas at Dallas in 1976. In 1989, Dr. Pitchford was recruited by the French Centre National de la Recherche Scientifique (CNRS) and has since been affiliated with the LAPLACE laboratory on the campus of the Université Toulouse III - Paul Sabatier, where she is presently an emeritus senior research scientist. Prior to that, she held the following positions: post-doc at the Commissarriat L’Energie Atomique (CEA) in Saclay, France (1976-1977); post-doc at JILA in Boulder, Colorado (1977-1979); member of the technical staff at Sandia National Laboratories in Albuquerque (1980-1984); and Discharge Physics Department manager (1984-1988) at GTE Laboratories in Waltham, Massachusetts. Dr. Pitchford’s research activities have focused on numerical modeling of low-temperature plasmas, both for fundamental studies of plasma properties and for the development of plasma sources for technological applications. Her main contributions to the field relate to improving the quality of the various input data needed for models. Recently, she has been involved in a community-wide project to make charged-particle transport and collision data available on-line. She is a member of American Physical Society and a fellow of the Institute of Physics (UK). She was awarded a CNRS Silver Medal in 1999 and the von Engel and Franklin Prize in 2015.