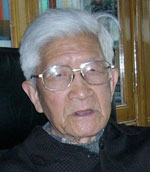 
"For a lifetimes advocacy of truth, democracy and human rights -- despite surveillance and house arrest, harassment and threats, even banishment -- through his writings, and publicly speaking his mind."


Professor Xu Liangying, the main translator and editor of the three volumes of The Collected Works of Einstein in Chinese, was born in Zhejiang Province, China, in 1920. He studied under Professor Wang Ganchang, who later became one of the founders of Chinese nuclear-bomb project. After the founding of the Peoples Republic of China, Xu became an editor of Science Bulletin. In 1957, Xu was labeled a "bourgeois rightist" and exiled to his home village to work as a peasant. In 1962, he began translating Einsteins work while working on the farm. He continued translating Einsteins articles on physics as well as social issues during the Culture Revolution (1966-1976), when Einstein was targeted as "the most notable counter-revolutionary bourgeois academic in natural science in this century". It was through Xus work that Einsteins ideas on human rights, socialism, and the social responsibility of intellectuals became widely known in China and cited in the Chinese democracy campaigns since late 1970. During this period, Xu also wrote that academic freedom is needed for science and culture to flourish.

Between 1985 and 1989, Xu initiated at least two historic petitions calling the government to respect human rights. Such efforts were quickly suppressed. In 1989, Xu called on the Chinese regime to live up to the letter and spirit of the 1948 United Nations Universal Declaration on Human Rights. After the Tiananmen massacre in 1989, Xu was under intense surveillance by Chinese authorities, escaping imprisonment mainly because he suffered a heart attack that year. In March 1994, Xu initiated the petition "A Call to Improve the Human Rights Condition in China". In April 1995, he initiated the petition "Welcome United Nations Year of Amnesty by Calling for National Amnesty (in China)". Signers of his petitions often became targets of persecution by the regime. Since the 90s, the APS Committee on International Freedom of Scientists has actively monitored Xus political and physical welfare.