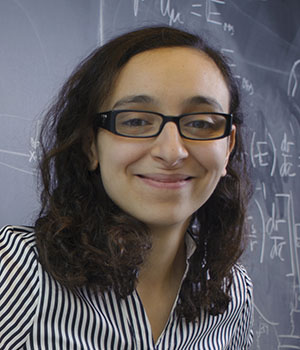 
"For the discovery of a massive, previously unknown stellar structure that may have shaped the history of the Milky Way, and the development of groundbreaking new methods to study our Galaxy's dark matter halo and growth history."


Professor Necib is an astroparticle physicist, interested in understanding the origin of Dark Matter. She uses a combination of simulations and observational data to correlate the dynamics of Dark Matter with that of the stars in the Milky Way, and infer properties of Dark Matter. She has investigated the local dynamic structures in the Solar neighborhood using the Gaia and contributed to building a catalog of local accreted stars using machine learning techniques. She has also discovered a new stream called Nyx, after the Greek Goddess of the Night, and is using spectroscopy to identify its properties. Professor Necib is interested in using Gaia in conjunction with other spectroscopic surveys to understand the Dark Matter profile in the local solar neighborhood, the center of the Galaxy, and in dwarf galaxies. With a background in particle physics, Professor Necib relates the empirical results of Dark Matter to current direct and indirect detection experiments. Professor Necib is originally from Tunisia. She moved to the US in 2008 to attend Boston University, where she obtained a Bachelor of Arts in Mathematics and Physics in 2012. She then obtained a Ph.D. in theoretical physics from MIT, under the supervision of Professor Jesse Thaler. Subsequently, she moved to California, where she was a Sherman Fairchild fellow at Caltech from 2017 to 2020, a Presidential Fellow at the University of California Irvine in 2020, and a Fellow in Theoretical Astrophysics at Carnegie Observatories from 2020-2021. Finally, she joined the MIT faculty in July 2021.