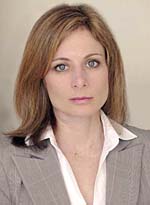 
"For her pioneering work on particle physics and cosmology, and her tireless efforts to inspire and engage both specialist and non-specialist, by allegory and fact through publications and presentations."


Lisa Randall studies particle physics and cosmology at Harvard University, where she is professor of theoretical physics. Her research concerns elementary particles and fundamental forces, and has involved the study of a wide variety of models, the most recent involving extra dimensions of space. She is currently working out the implications of extra-dimensional models for experiments, particularly those that will take place at the Large Hadron Collider (LHC). She has also worked on supersymmetry, Standard Model observables, cosmological inflation, baryogenesis, grand unified theories, general relativity, and string theory. Professor Randall recently completed a book entitled Warped Passages: Unraveling the Mysteries of the Universe's Hidden Dimensions, which was included in the New York Times' of 100 notable books of 2005.

Professor Randall earned a BA in 1983, and obtained her Ph.D. in particle physics in 1987 from Harvard University. She held professorships at MIT and Princeton University before returning to Harvard in 2001. Professor Randall is a member of the American Academy of Arts and Sciences, a fellow of the American Physical Society, and is a past winner of an Alfred P. Sloan Foundation Research Fellowship, a National Science Foundation Young Investigator Award, a DOE Outstanding Junior Investigator Award, and the Westinghouse Science Talent Search. In 2003, she received the Premio Caterina Tomassoni e Felice Pietro Chisesi Award, from the University of Rome, La Sapienza. In autumn 2004, she was the most cited theoretical physicist of the previous five years. In 2006, she received the Klopsted Award from the American Society of Physics Teachers (AAPT). Prof Randall was featured in seed Magazine's "2005 Year in Science Icons" and in Newsweek's Who's Next in 2006 as "one of the most promising theoretical physicists of her generation." She has helped organize numerous conferences and has been on the editorial board of several major theoretical physics journals.