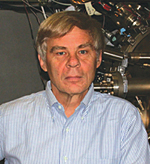 
"In recognition of his outstanding innovations in molecular beam epitaxy technology and semiconductor materials design that have changed our understanding of the physics of lower dimensional electron systems."


Pfeiffer was born and raised in Waukesha, Wisconsin. He received his bachelors degree in physics from the University of Michigan in 1961, and his PhD in physics from The Johns Hopkins University in 1967. His postdoctoral work at Johns Hopkins in 1967-1968 resulted in the first measurement of the nuclear magnetic moment of B12, a long-lived beta-unstable isotope of boron. In 1968 he joined the technical staff of AT&T Bell Laboratories in Murray Hill, New Jersey. He was named Distinguished Member of Technical Staff in 1990, and continued in this position when Bell Laboratories became part of Lucent Technologies Inc. An early technical highlight in his career was the discovery of the Mössbauer Effect in the isotope Ge73, the sharpest Mössbauer resonance observable at room temperature. In the 1980s he switched his career focus to molecular beam epitaxy (MBE). He designed and fabricated by MBE the first semiconductor laser that operates from the ground state of a quantum wire. He has also produced by ultra-clean MBE a GaAs/AlGaAs quantum well heterostructure showing the highest electron mobility ever reported for any semiconductor. This work exploits the natural perfection of the GaAs/AlAs hetero-interface, and has made possible numerous observations of subtle 2D physics that have been confirmed by independent groups, but that are thus far seen only in this uniquely clean material. In an ongoing effort to exploit these near-perfect hetero-interfaces in structures of still lower dimensionality, he has created a variation of MBE called cleaved-edge-overgrowth, which allows fabrication of quantum dots, quantum wires, and other quantum scale structures of unprecedented quality. Pfeiffer is a Fellow of the APS, and the Johns Hopkins Society of Scholars. He has co-authored more than 600 papers in peer-reviewed journals and holds 18 patents.