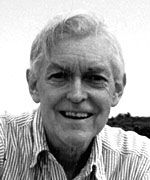 
"For seminal theoretical concepts in the theory of turbulence, stability, rotating and stratified fluid flows, and other fluid dynamical problems, including upper bounding theory of statistically stationary turbulence, semicircle theorems for the stability of geophysical flows, the spin-up problem, and reaction-diffusion and double-diffusion problems."


Dr. Howard received his BA degree from Swarthmore College in physics in 1950 and his Ph.D. in Mathematical Physics in 1953 from Princeton University. After lecturing in Mathematics at Princeton University and a short stop at Caltech, he joined the faculty at M.I.T. in 1955 where he became Professor Emeritus in 1984. Earlier, in 1981 he moved to Florida State University where he recently became Prof. Emeritus in 1996.

Dr. Howard's work has largely been in the field of fluid mechanics, especially hydrodynamic stability, geophysical fluid dynamics and some aspects of turbulence and continues at the present time, primarily in rotating flow and stability theory. Other aspects of applied mathematics have also received some of his attention, especially reaction diffusion equations and, most recently, models of semicrystalline polymers.