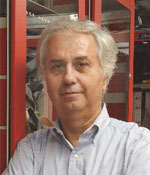 
"For their leading role in the establishment and use of precision silicon tracking detectors at hadron colliders, enabling broad advances in knowledge of the top quark, b-hadrons, and charm-hadrons."


Luciano Ristori was born in Prato (Italy) on December 13, 1948. In 1967 he was admitted at the Scuola Normale Superiore in Pisa where he graduated in 1971 with the title of ÒDottore in FisicaÓ. His thesis was on the measurement of the total p-p cross at the Intersecting Storage Rings (CERN-R801). In 1973, he joined the NA1 Collaboration at the CERN SPS for the first electronic measurement of the lifetime of charmed mesons using an active silicon target. In 1977, he obtained a permanent position at the Italian National Institute for Nuclear Physics (INFN). In 1991 he took a position of Associate Professor at the Scuola Normale Superiore in Pisa. In 1990 he conceived and proposed a trigger based on secondary verticles (SVT) to the CDF Collaboration. The SVT trigger, was commissioned in 2001 and has allowed CDF to perform measurements otherwise impossible, especially in the area of hadronic decays of B mesons and barions, including the precise measurement of the Bs oscillation frequency. Since 1998, he holds a position of Research Director at INFN in Pisa. He was Co-Spokesperson of the CDF Collaboration from 2003 to 2005. Since 2005 he is responsible for the whole Italian group in CDF.