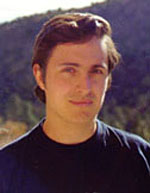 For developing a method that significantly advances the capability for modeling gravitational radiation by making possible the stable numerical solution of Einstein's equation near moving black holes.

Dr. Lehner's main field of research is Numerical Relativity, studying the modeling of binary black hole collisions, critical phenomena and the evolution of matter in black hole spacetimes. He is also interested in non-perturbative Quantum Gravity.

Dr. Lehner was honored by the Council of Graduate Schools with the Distinguished Dissertation Award (1998), by the University of Pittsburgh with the Andrew Mellon Predoctoral Fellowship (1997) and by the National University of Cordoba with the Honor Prize (1993).