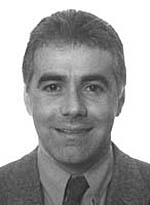 
"For an exquisite series of experiments using high intensity lasers to measure the high pressure properties of hydrogen across the molecular insulator to monatomic metal transition."


Dr. Da Silva received his B.S. degree in engineering physics in 1982 and his Ph.D. in Plasma Physics in 1988, both from the University of British Columbia. His thesis research topic was on the opacity of strongly coupled plasmas. In 1988 he joined the University of California, Berkeley where he worked in collaboration with scientists at Lawrence Livermore National Laboratory on the development of high intensity x-ray sources and x-ray lasers. In 1992 he became a staff scientist at Lawrence Livermore National Laboratory where he led the development and application of x-ray lasers to probe high density plasmas. His current research includes the study of material under extreme pressures using laser generated shock waves, the study of x-ray lasers as potential xuv sources for plasma probing and the physics of laser-tissue interactions relevant to medicine. Dr. Da Silva is a fellow of the Optical Society of America and is a recipient of the Institute of Electrical and Electronics Engineers early achievement award. He is also a member of the American Physical Society, Optical Society of America, The International Society for Optical Engineers (SPIE), and IEEE.