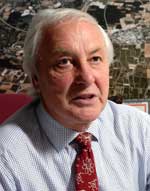 
"For a sustained career of technical innovation and leadership in the SPS proton-antiproton collider, culminating in the construction and commissioning of the LHC."