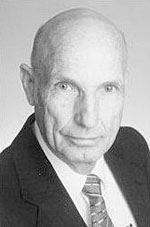 
"In recognition of his outstanding contributions to the temporal measurement and interpretation of nonlinear physical processes in shock-compressed matter."


Lynn Barker was a U.S. Navy carrier pilot in the Korean War. At the University of Arizona, he earned an MS in physics in 1955. He also completed a year of post-graduate studies at Columbia University in 1962.

Barker spent 27 years at Sandia National Laboratories, where he was among the first to receive the title Distinguished Member of the Technical Staff. His main contributions were innovations in time-resolved shock-wave instrumentation, and the use of the new techniques in measuring dynamic properties of condensed materials.

Barker was a Senior Staff Consultant at Terra Tek in Salt Lake City from 1974 to 1981. There he developed a new fracture toughness test method which resulted in several patents and two ASTM standard test methods.

Since 1990, Barker has been president of his own company, Valyn International, where he continues to contribute innovations to the VISAR shock-wave instrumentation techniques which he pioneered in the early 1970's. He has authored 56 open literature publications, holds 10 patents, and was recently made a Fellow of the American Physical Society.