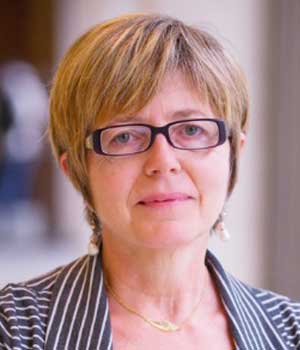 
"For original contributions to equilibrium and non-equilibrium statistical mechanics, including profound work on equilibrium and driven vortex systems, and fundamental research and leadership in the growing field of active matter."


Cristina Marchetti received her laurea in physics from the University of Pavia in 1978 and her Ph.D. from the University of Florida in 1982. For three decades she was a member of the faculty at Syracuse University, where she was the William R. Kenan, Jr. Distinguished Professor of Physics. Currently she is a professor of physics at the University of California, Santa Barbara. Marchetti was trained in nonequilibrium statistical physics and her research over the years has focused on collective phenomena in physics and biology. She has contributed to the understanding of transport in nonequilibrium and supercooled fluids, the phases of vortex-lines in type-II superconductors, and the dynamics of driven disordered systems. Her current focus is on the emergent behavior of active matter. Her contributions to this field have included minimal models of spontaneous aggregation of active colloids and of the dynamics of topological defects in active liquid crystals, and the description of living tissues as active materials. Marchetti is currently co-lead editor of Physical Review X and of the Annual Reviews of Condensed Matter Physics. She has served on elected positions within the American Physical Society, including chair of GSNP and of GSOFT and as member-at-large of DCMP. She is a fellow of the American Physical Society and of the American Association for the Advancement of Science, and a member of the American Academy of Arts and Sciences.