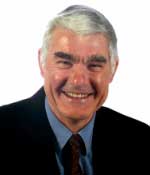 
"For advancing the understanding of recombination processes, in particular for developing a microscopic theory of three-body ionic recombination; and for his novel applications of classical and quantum mechanical methods to the dynamics of atomic, molecular and ionic systems."


Dr. Flannery received both his B.Sc., (first class honors degree in mathematics), and his Ph.D. degree in theoretical physics from The Queen's University of Belfast in 1961 and 1964, respectively. He has held faculty positions at Queen's University (1964-66), Harvard University and Harvard-Smithsonian Center for Astrophysics (1968-71) prior to joining the School of Physics, Georgia Institute of Technology in 1971 where he was appointed Professor in 1974 and Regents' Professor in 1993. He has also been a visiting fellow at the Joint Institute for Laboratory Astrophysics at Boulder in 1977 and the Institute for Theoretical Atomic and Molecular Physics at Harvard in 1993 and a Guest Professor (1996) at the University of Innsbruch. He serves on the Editorial Board of the Atomic and Molecular Physics Handbook (AIP Press) and Book Series (Springer Press) and served on the Executive Board of the Gaseous Electronics Conference. He is a fellow (1979) of the American Physical Society and a fellow (1980) of the Institute of Physics, London. He has been the recipient of various Sigma-Xi awards--for best paper in 1974, for Ph.D. thesis advisor in 1975, and for sustained research in 1992. He received the Georgia Tech Distinguished Professor Award in 1995. In 1997, he was elected a Honorary Member of the Royal Irish Academy. In 1998, he was awarded the degree of Doctor of Science [D.Sc., (honoris causa) ] by The Queen's University of Belfast. He is also a Divisional Associate editor of Physical Review Letters.

Dr. Flannery's area of expertise is in the theory of atomic and molecular collision processes in general and of recombination processes at thermal and ultra cold energies, in particular. He has also contributed widely to the theory of heavy-particle collisions, electron-excited atom collisions, Rydberg collisions and Ion-Molecule Reactions. He is currently working on theories of three-body recombination for dimer formation in the Bose-Einstein Condensate and for the production of antihydrogen in a positron-antiproton plasma at cyrogenic temperatures and of three-body electron-ion recombination at ultracold (milli-Kelvin) temperatures.