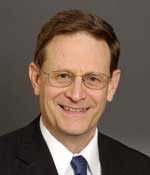 
"For his public service and major contributions in the field of risk analysis and its application leading to increased public understanding of issues at the interface of physics and society."


M. Granger Morgan is Professor and Head of the Department of Engineering and Public Policy at Carnegie Mellon University where he is also University and Lord Chair Professor in Engineering. In addition, he holds academic appointments in the Department of Electrical and Computer Engineering and in the H. John Heinz III College. His research addresses problems in science, technology and public policy with a particular focus on energy, environmental systems, climate change and risk analysis. Much of his work has involved the development and demonstration of methods to characterize and treat uncertainty in quantitative policy analysis. At Carnegie Mellon, Morgan directs the NSF Center for Climate and Energy Decision and with Lester Lave co-directs the Carnegie Mellon Electricity Industry Center. Morgan chairs the Scientific and Technical Council for the International Risk Governance Council. He is a Member of the National Academy of Sciences, and a Fellow of the AAAS, the IEEE, and
the Society for Risk Analysis. He holds a BA from Harvard College (1963) where he concentrated in Physics, an MS in Astronomy and Space Science from Cornell (1965) and a Ph.D. from the Department of Applied Physics and Information Sciences at the University of California at San Diego (1969).