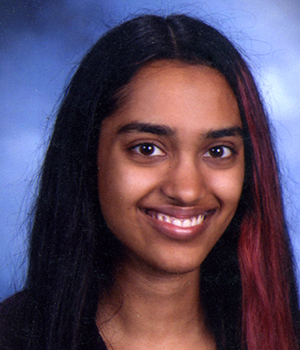 
"For the discovery of and measurements on a quantum Hall nematic state on the surface of Bismuth from low temperature STM experiments."


Mallika spent a large part of her childhood in Mumbai, India, interspersed with periods in the US, before moving to Ohio. Thanks to enthusiastic professors and exposure to research in experimental labs, Mallika chose to major in physics, graduating from MIT with a B.S. in 2012. She then moved to Princeton to pursue a Ph.D. with Prof. Ali Yazdani. Mallika’s PhD research investigated the role of electron-electron interactions and their tunability on the surface of bismuth. She conducted experiments imaging electronic behavior with atomic scale resolution using a scanning tunneling microscope operating at milliKelvin temperatures and high magnetic fields. This local-probe technique was adapted to a new regime of wavefunction mapping to identify exotic quantum Hall states including a nematic phase with broken rotational symmetry and a ferroelectric phase that carries a dipole moment. Subsequent work examined the confluence of interactions and topology at the boundaries between different nematic domains and demonstrate that these domain walls can be switched from metallic to insulating, in accordance with a new class of interacting Luttinger liquid theory. Mallika received her Ph.D. from Princeton University in 2019 and is currently a Pappalardo Fellow at MIT, exploring ideas of emergent quantum phenomena and symmetry breaking in two-dimensional materials.