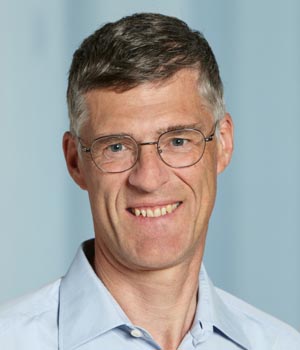 
"For pioneering nonlinear optical spectroscopy studies that led to a fundamental understanding of the emergence and coupling of electric and magnetic orders at the level of domains and domain walls."


Professor Manfred Fiebig is known for his work in light-matter interaction in systems with strong electronic correlations. Multiferroics are of particular interest to him. Professor Fiebig obtained a degree in physics (Diploma) at the University of Dortmund, Germany, in 1992 and his PhD at the same university in 1996. From 1997 to 1999, he was a Japan Science and Technology Research Fellow at the University of Tokyo, Department of Applied Physics. In 1999 he returned to the University of Dortmund, where he headed a Junior Research Group and was habilitated in 2001. From 2002 to 2006, Professor Fiebig worked as a Heisenberg Fellow of the German Research Foundation (DFG) at the Max Born Institute for Non-Linear Optics and Short-Pulse Spectroscopy in Berlin. In 2006 he was appointed Professor of Experimental Solid-State Physics at the University of Bonn, a position he held until 2011. Since 2011, Manfred has been Professor of Multifunctional Ferroic Materials in the Department of Materials at ETH Zurich where he now heads a group of about 20 people from, presently, 15 different countries. He served as head and deputy head of the Department from 2014-2018. He is the leader of the Working Group Magnetism in the German Physical Society (DPG). His recent honors include an APS Fellowship and an ERC Advanced Investigator Grant with a Proof of Concept upgrade. In 2021 he was elected as a member of the National Research Council of the Swiss National Science Foundation (SNSF).